Born in 1905, in Upstate New York, Marion Sheret DeGrazia was a fine artist in her own right. Having attended State Teachers College in Buffalo New York, she also studied sculpture and modeling at Columbia University. Marion moved from the East Coast to Tucson in 1941 with her young son Harold.

In 1945, on a visit to Ted DeGrazia’s first Tucson studio, Marion met the artist for the first time. As she recalled, his first words to her were “Where have you been?” In 1947, the couple married in the jungles of Mexico. Marion was instrumental in the success of the gallery by managing the studio and allowing DeGrazia to travel and show his art, knowing that the gallery was always in good hands under her watchful eye. 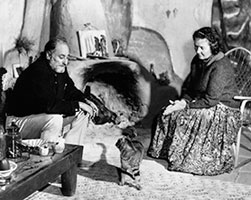 After DeGrazia’s death in 1982, Marion continued the work of the foundation until her death in 2002 at the age of 97. Her work, which includes sculpture, paper mache reliefs and paintings, are on display throughout the Gallery in the Sun.