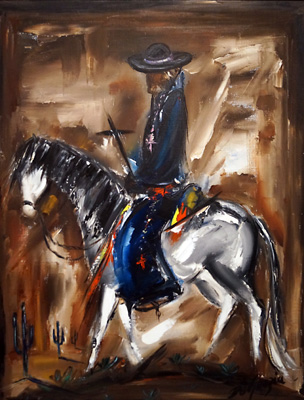 In 1687, Padre Eusebio Kino arrived in northern Mexico on horseback traveling into what is now Arizona. Padre Kino explored the vast lands of Arizona and California, making friends with the Native Americans who he encountered as he mapped the region.

Unfortunately, with him also came the soldiers of the King of Spain, who brought guns and swords, while the gentle priest brought a simple cross to introduce Christianity without destroying the native cultures. He told them stories of Christ and the Bible, introduced them to Christian ceremonies, and together they built 24 missions in 24 years that stretched from Sonora, Mexico, to Southern Arizona. San Xavier also known as the “White Dove” of the desert is one of the most impressive, located just southwest of Tucson.

DeGrazia was inspired by the memorable events in the life and times of Padre Kino, the heroic, historic and immortal priest-colonizer of the Southwestern desert. Since childhood, DeGrazia admired Padre Kino for his education, life of adventure and his respect for Native Americans. DeGrazia traveled to every Kino mission as he lovingly studied the life of his favorite Jesuit priest. The Mission in the Sun is dedicated to his memory. 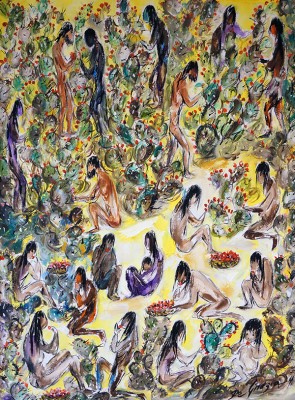 The story of the ill-fated Spanish expedition is told in this collection that includes sketches, watercolors, oils and enamels. DeGrazia read extensively about the adventures of the Spanish explorer Álvar Núñez Cabeza de Vaca, known as the first non-Native American to travel into what are now the states of Texas, New Mexico and Arizona.

In 1527, Cabeza de Vaca and 600 Spanish conquistadors set sail for the Americas charged with conquering the Native Americans, converting them to Christianity and finding the seven cities of gold. Upon reaching the coast of Florida, only four men including Cabeza de Vaca, Alonso Castillo, Andrés Dorantes and his slave Estebán, an Arab Moor from Morocco, survived illness and the seas. The men embarked on a nine-year-long trek through Texas, New Mexico and Arizona battling starvation, cholera, malaria, mosquitoes and slavery at the hands of the Native Americans. Despite their struggles, Cabeza de Vaca learned to understand and appreciate the local tribes. In turn, the Native Americans came to believe the conquistadors had traveled from the sun and had great powers of healing. Crowds of Native Americans followed them in their journey and asked for blessings from the bearded strangers.

DeGrazia created this collection in 1975 drawing inspiration from Papago legends. During the 1980s, the name Papago was officially changed to Tohono O’odham, which means Desert People in the O’odham language. DeGrazia depicts four legends (the Creation of the World, the Monster of Quitovac, the Eagle-man and Ho’ok) from traditional Tohono O’odham Nation stories. 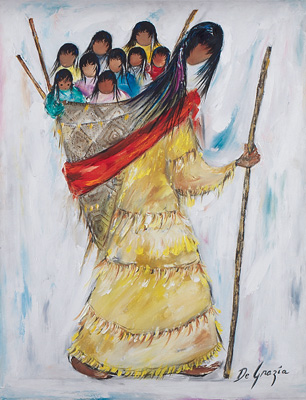 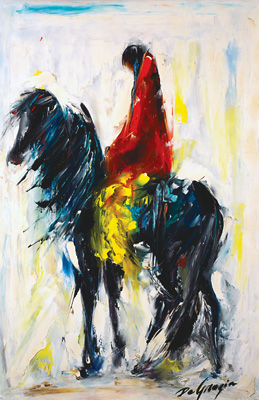 DeGrazia’s “Winds From the East”

More than five decades of DeGrazia’s developing style are represented in this series of paintings, beginning with the profile of two Native Americans that the artists created when he was just 16 years old.

In the collection, which spans from 1925 to 1980, DeGrazia’s compassion of the native people of the region, including their struggles with poverty and oppression are highlighted.

The retrospective series ends with the last self-portrait DeGrazia painted. This self-portrait includes characters that made DeGrazia famous throughout his career such as children, horses, a prospector and a Madonna and child that evokes transience amid fond memories. It was also one of his last oil paintings. He concentrated instead on printmaking and sculpture, but continued to sketch and make small watercolors until his death in 1982. 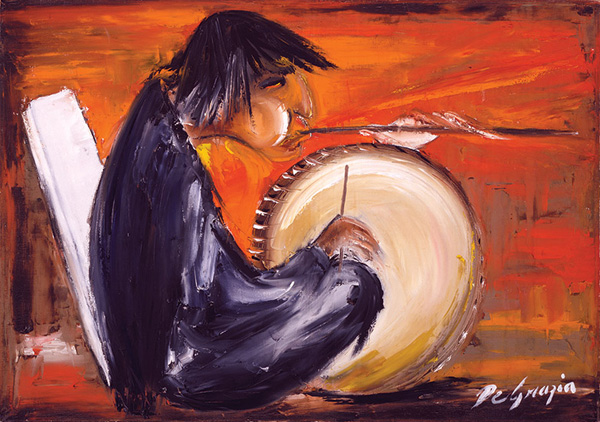 In 1967, DeGrazia created a collection of forty paintings depicting the pageant of the Yaquis.

If you visit any Yaqui village in Northern Mexico or Southern Arizona during the forty days of Lent you will see what it has meant to them. This is their biggest celebration of the year. The Yaquis mark Easter with costumes, masks, paper flowers, and forty days and nights of Lenten observance and dancing. What the Yaqui knew and what the Catholic priests told them is what they have put together. The devout Yaquis adapted the stories that Catholic priests told them and made them their own. DeGrazia captures this celebration in his collection.

On Saturday night preceding Palm Sunday, an all-night fiesta is held with processions, religious services, dancing, and the beloved Deer Dancer appears. The Pascola storytellers jest with the crowd and pursue the Deer Dancer, who portrays a deer in the forest eluding his captors. The ceremony inspired DeGrazia to create the seven-foot bronze statue of the Deer Dancer in the gallery’s cactus courtyard. 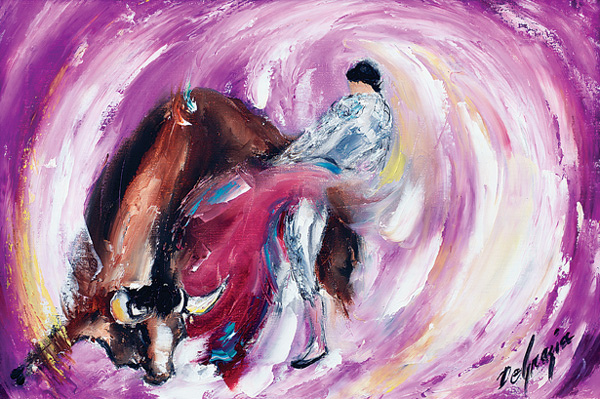 The splendor of a bullfight from start to finish is illustrated in this collection of paintings and sketches created in 1966. It wasn’t until 1942 while working with Jose Clemente Orozco in Mexico City, Mexico that DeGrazia witnessed his first authentic bullfight and immersed himself in the excitement of the spectacle.

DeGrazia instantly fell in love with the color, smells and sounds of the bullfight. This admiration is highlighted in this series with DeGrazia’s use of color and movement to illustrate the story of a single bullfight.