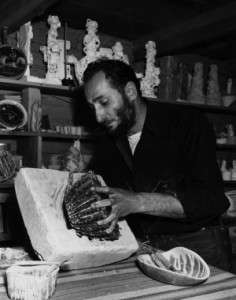 A true Renaissance man, DeGrazia experimented with all forms of artistic expression, from oils and watercolors, sketches to ceramics and bronze sculptures though his main focus was oil painting. One of his earliest works of art was a head of Christ, baked in his mother’s oven in Morenci. DeGrazia learned to paint with a palette knife, mastering the technique. Other artists such as Orozco, Rivera and Van Gogh influenced DeGrazia’s art. This can be seen as DeGrazia’s skills progressed and his taste in materials evolved. DeGrazia’s paintings range in subject and style. His early work was very serious in nature with a focus on the dark side of the Mexican Revolution and the poor peasants of Mexico and the Indians of the Southwest. 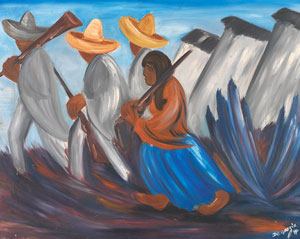 DeGrazia’s “The Walls Came Tumbling Down”

DeGrazia worked with Rivera and Jose Clemente Orozco on mural projects in Mexico City, and they in turn sponsored a one-man exhibition of his paintings at the prestigious Palacio de Bellas Artes in 1942.

His impressionist style also evolved with a visit to Tahiti to study the works of French painter Paul Gauguin.

DeGrazia’s creations also turned to speed, movement and energy with such paintings as “The Cockfight”, “Blue Ballerina” and “Bucking Bronco”.

For more than 50 years, DeGrazia painted the Sonoran desert as well as visual narratives of the Southwest’s Native American culture. During trips to Mexico and through the American Southwest, DeGrazia observed rituals and traditions that inspired his work. 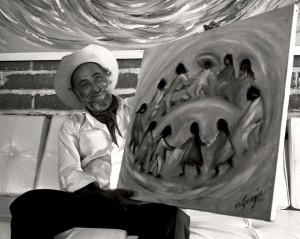 DeGrazia discovered that painting angels and native children were a subject that people fell in love with. This is where DeGrazia found his success. Today, the Gallery in the Sun’s permanent collection holds more than 15,000 of DeGrazia’s original works of art. Critics have discounted DeGrazia’s success as being commercial, but DeGrazia is one of the most prominent impressionist painters in recent history.

“It’s not how much paint from the tube I put on the canvas, or even how much I leave out. I work for the feeling of a piece.” – DeGrazia